The Smart-Ass Guide to Art

Interesting Stuff: A biggie in the field of portraiture, surprisingly little is known about Frans Hals. We do know that he had at least two wives and ten sons, five of which were also painters. Add the two painter brothers of Frans' to the mix, and a telephone call to the Hals house turns into an Abbott and Costello type affair:


After four hours of variations on this theme a phone call would end in insanity, death, or both (hmmm, kind of like every H.P. Lovecraft story... but I digress). Fortunately, there were no telephones at this period in time.

Hals was known as a keen portaitist in his day, and his stature has only grown since then. Strangely enough, even though portraits were in high demand during this period, he still died almost penniless.

One of the things academicians always point to in his portraits is his uncanny ability to render people as individuals instead of idealized models or forms. Bringing this "psychological insight" into his subjects onto the canvas was quite a jump forward from the stately portraits that came before. It also gives us the chance to play the fun-filled game of...

Guess What These People Are Thinking!

To find out what these folks in "The Archers of St. Adrian" are thinking, just scroll down and check out the number of your favorite person. If you think you have a funnier, more insightful, or just plain more amusing caption, mail the number of the person and the comment to me and I'll add it to the list. Please, keep them clean - and of course, I get to choose which ones go up, so don't get mad if you don't see it! 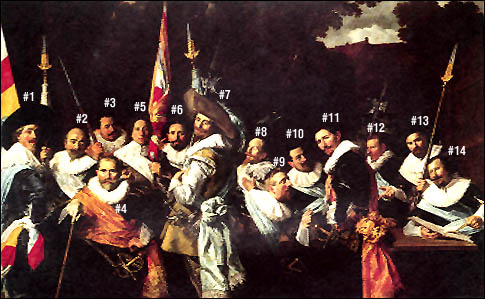